So you have played Texas Hold’em, Omaha, Stud, and all other poker games you could learn, and you no longer get the thrill out of playing these common variants?

That’s quite alright, as I have a brand new poker game to teach you that’s going to keep you occupied for dozens of hours and give you a completely new way of looking at poker as a whole.

Chinese Poker is a relatively new poker variation that became popular in the high-stakes circles some years ago and quickly spread to online poker platforms as well.

While it is definitely not as popular as the likes of Texas Hold’em, Chinese Poker is a super fun poker game that you can teach your friends and play in social situations with just about anyone.

Because of its simple rules and the fact it isn’t played with chips, Chinese Poker can be a great game to play casually on the sidelines of poker tournaments or even at bars and pubs.

All you will need to play Chinese Poker is a deck of playing cards and a pen and paper, and the skill element in this game is much lower as there is no bluffing involved.

If you like the idea of playing a simple poker game with your friends and gambling it up, I am going to start off by teaching you the most basic Chinese Poker rules first.

Before you can play any game, you need to learn its basic rules and the way in which gameplay goes down. Fortunately, this is very simple when Chinese Poker is in question.

A hand of Chinese Poker starts with the dealer, which changes each hand, dealing 13 cards to each of the players in the hand, all face down.

Since each player must receive 13 cards, Chinese Poker can only be played with a maximum of four players at any one time.

Once the cards are dealt out, the players can look at them and decide if they want to surrender their hand or play on. 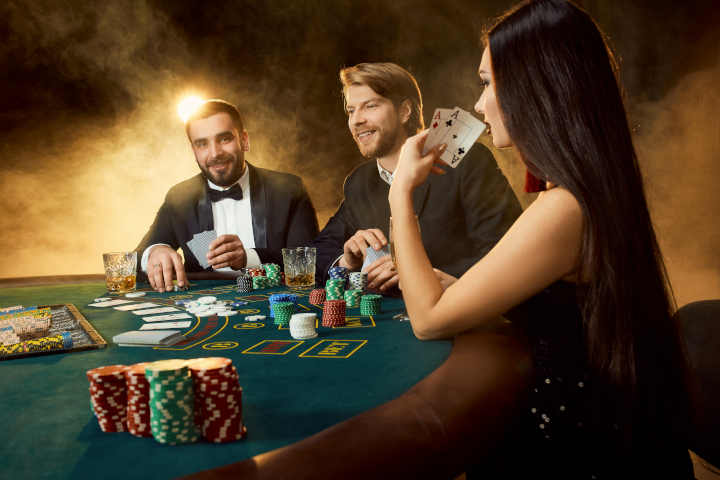 Once all the hands have been set at the table, players will expose their hands and will win “points” by beating their opponents’ hands and earning royalties.

Unlike games like Texas Hold’em, there is no betting, bluffing, or folding on various betting rounds in Chinese Poker.

You will either get awarded points if your hands are among the winners or lose points if they are losers or if you foul your hand or decide to surrender at the start.

Here is what happens in each of the scenarios:

Now that I have explained the most basic Chinese Poker rules, it is time to talk about Chinese Poker hands and the way hand rankings work.

Fortunately for all the poker players out there transitioning from other versions of the game, Chinese Poker hand rankings are identical to those in the popular game formats.

Chinese Poker hands are ranked as follows, from highest to lowest:

It is worth noting that the front hand only contains three cards and, as such, cannot be a straight or a flush by default.

The only time when a three-card straight or flush counts is when you make a straight or a flush in all three of your hands, in which case you win outright. 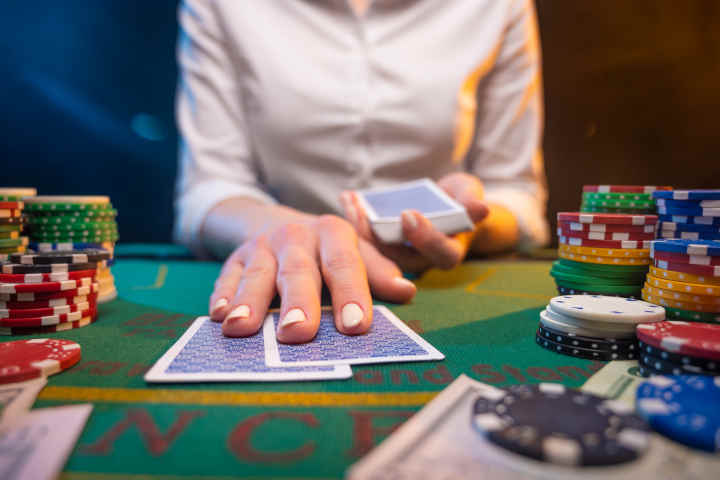 In all other cases, the front hand can only be three of a kind or weaker, with one pair and high card hands most common in the front.

For the most part, telling which hand beats which should not be too difficult if you are a poker player already, as the Chinese Poker hand rankings don’t differ much from those in other poker games.

This brings us to the fun part of the game. Unlike other poker games that are played with chips and bets made on multiple betting streets, Chinese Poker uses a simple scoring system to keep track of the winners.

Instead of having to bet your hands, you will simply agree on the value of a unit before you start playing and keep score after each separate hand is played.

At the end of each hand, when the cards are exposed, players will receive or lose points based on how their hand compares to other hands, along with additional royalty points for making big poker hands. 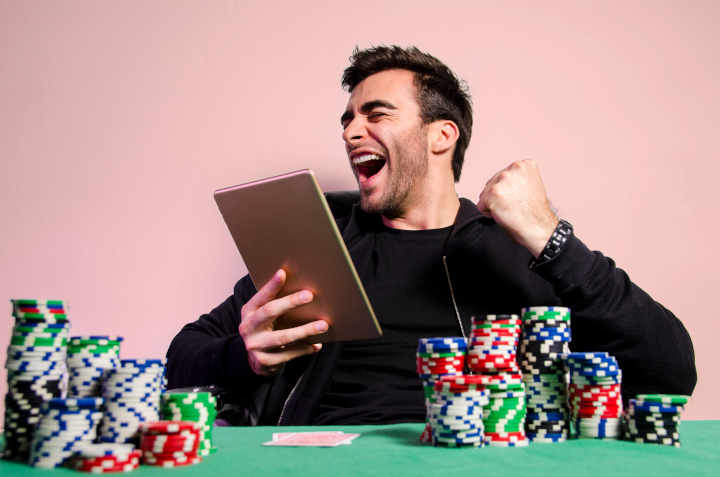 It is important to note that each of the three hands can bring you points separately, with all players comparing their back, middle, and front hands to those of the other players.

For example, players will compare their back hands first. The scoring for that will look as follows:

Player 1 has the best back hand. He beats all three opponents and receives +3 units for his win. Player 2 loses to player 1, dropping one unit, but beats the other two players, earning him two units, for a total of +1 unit.

Player 2 has lost the hand to players 1 and 2 but beat player 4. For that reason, he only loses one unit. Finally, player 4 loses to all three players, losing a total of -3 units.

Points are awarded this way for each of the three hands after every deal. Players who have surrendered don’t compare their cards and simply take the pre-determined loss.

The Chinese Poker rules are not as set in stone like those of other poker versions. For that reason, players in different games sometimes agree to different scoring systems, which sometimes include bonus units being awarded in certain cases.

Most often, a player who wins all three hands in one deal will be awarded bonus units, while some games play with the winner of two hands awarded the bonus units.

Royalties are another very important part of the Chinese Poker scoring system. These are extra units that players receive when they make big poker hands, such as full houses, straight flushes, and quads.

Commonly, the following royalties are awarded in Chinese Poker:

In addition to the regular royalties, which are awarded only after all hands are exposed, there are special royalties awarded for “naturals.”

These are special types of hands that include all 13 cards dealt to the player. If a player has a natural, they need to announce it immediately before any players have surrendered.

The following types of naturals are commonly awarded, although others can be included in the game if players decide on it:

It is also worth noting that naturals don’t have to be a part of the game and are completely optional. Players can come up with their own naturals and their own points system for naturals as they see fit.

The original version of Chinese Poker is quite luck-based, with all cards dealt out at the start and not a lot of room to make mistakes.

To make the game more difficult, players came up with Open-Faced Chinese, a version of the game in which all cards are dealt face-up, but players don’t receive all the cards at the start.

In Open-Faced, you are dealt only five cards to start with, and additional cards are dealt one at a time.

Players must place their cards in their three hands one at a time while making sure that they don’t foul their hands, which can sometimes be a gamble.

This adds an element of strategy to the game that does not exist in regular Chinese Poker and makes the game a lot more intense and complicated. 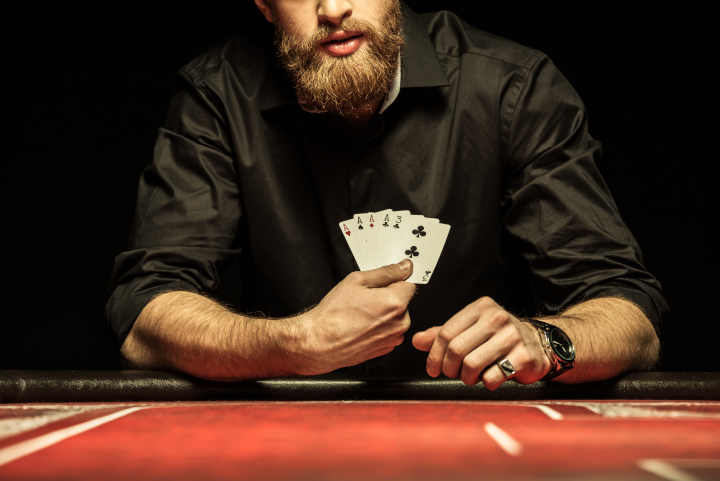 It is also worth noting that royalties play a much bigger role in Open-Faced Chinese, as big hands are more difficult and riskier to make.

If you want to learn this version of Open-Faced Chinese, the game will be very exciting but may take a lot more time to get the hang of and master.

I also don’t recommend playing this version of the game with experienced players, as they will have a significant edge over you until you learn all the tricks.

Another version of Chinese Poker, Pineapple is played similarly to Open-Faced Chinese, with one major difference.

Instead of receiving one card at a time, players are dealt three cards at a time. Two of these cards must be placed in your hands, while one is discarded face down.

This adds yet another strategy element, as you can now discard cards your opponents need to make their hands and make further decisions about the placement of the cards you decide to keep.

Pineapple is one of the most advanced versions of Chinese Poker and is often played by high-stakes players on the poker tournament circuit.

Pineapple can only be played with a maximum of three players at a time, as there aren’t enough cards in the deck to support the discarding of cards in each dealing round for four players.

Now that you know the Chinese Poker rules, you are ready to play your first game. I highly recommend playing with your friends first and not trying to play for a lot of money early on.

In fact, Chinese Poker is a game that can be played without any money at stake at all, so you can play with your friends for anything you want.

The game is extremely fun and easy to learn, and there is nothing wrong with keeping the tables with the scoring system on hand while playing until you know them by heart.

Make sure you agree on all the rules with the other players before you start playing and enjoy one of the most dynamic and entertaining forms of poker ever invented!