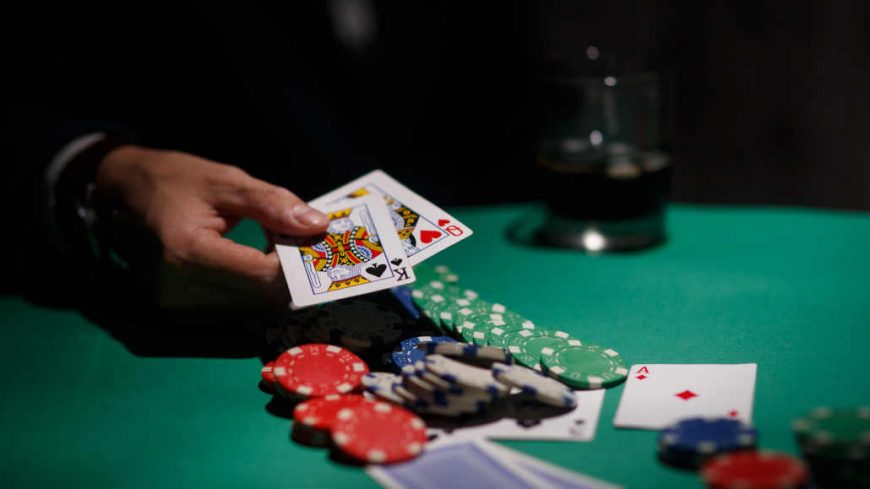 You have been playing a poker tournament for hours or days even, and the tournament clock is showing that you are almost in the money. What do you do if you are dealt a big poker hand, and someone shoves all in for all your chips?

This is a question often asked by amateur players and recreationals who don’t really understand tournaments or poker as a game in general.

While the obvious answer to anyone who plays poker seriously is, “I call,” playing close to the money can be a lot more complex than simply making one call or fold.

In this article, I discuss the topic of the poker bubble, the popular name for that period in a tournament when the first payments are looming, but everyone who busts now will go home with nothing at all.

Let’s start out by talking about what is the poker bubble and how exactly it works before we proceed to some basic poker bubble strategy.

What is The Poker Bubble?

The bubble stage of a poker tournament is considered the stage in which most of the remaining players will get paid, but there are still a few who won’t.

Technically speaking, only one player busts on the bubble and is thus often referred to as the “bubble boy.”

In reality, however, the bubble stage of the tournament is usually a bit more extensive than this, and play starts to change dramatically once a few players are left before the money spots are reached.

In live tournaments, such as the WSOP Main Event, play is often held back, and all tables are forced to play only one hand at a time until the last few players bust out and everyone else makes the money. 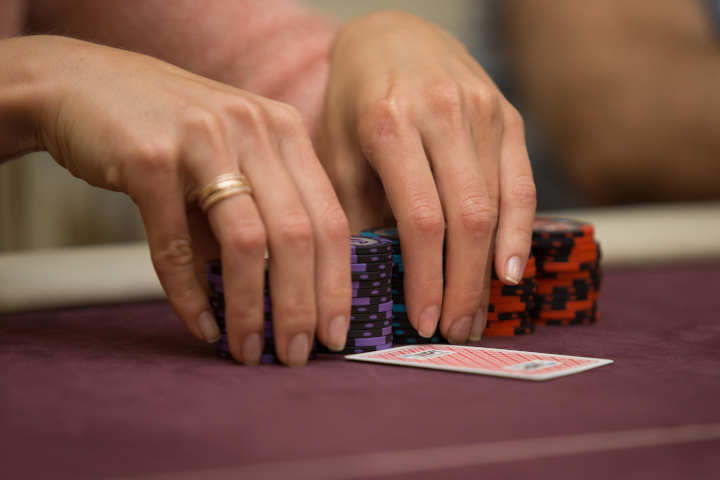 Typically, amateur players will start to tighten up and play more carefully the moment it seems like there is a very high chance they will make money by folding most of their hands.

When the bubble stage of a poker tournament finally comes, some players will start to play very timidly, others will go absolutely wild, while some will not change their game at all or even be aware of the bubble.

We can start out by talking about these different approaches and why they make sense for certain types of players.

Playing Tight to Make the Money

Someone once said that “tight is right” in Texas Hold’em, and there are many players who take this to a whole new level, especially when it comes to playing the bubble stage of a poker tournament.

The reasons for playing tight in the bubble stage differ. Some players are playing above their bankrolls, and a min-cash seems like a great thing in their eyes, as they put up too much money to play the tournament in the first place.

On the other hand, I have also seen many players for whom the min-cash doesn’t really mean anything play very tight on the bubble, simply because they consider making the money a win in the tournament.

Of course, both of these reasons don’t make much sense. You should never be playing a tournament that you can’t afford to play in, nor should you consider a min-cash to be a big achievement.

Yet, many players, especially amateurs, will be more than happy to fold their way into the money and avoid any big confrontations during the poker bubble phase.

When you spot these players, you should make sure to try and take maximum advantage of this by playing very aggressively against them. Put them to the test during the bubble stages of the tournament.

Wild Cannons on the Poker Bubble

The bubble stage is also the time when pro players tend to go crazy and start playing more hands than ever before and play them more aggressively than before.

If you are careful and aware of your surroundings, you will notice some players 3-betting and 4-betting a lot more during the bubble stages of the tournament, as well as betting more aggressively after the flop.

This is a function of them understanding that the bubble in poker is the time to push amateurs off their hands and accumulate chips they need to make the final table.

Of course, playing too aggressively can also have its negative effects, especially if you run into a monster hand that simply can’t fold.

When playing against these types of players on the poker bubble, you should make sure not to let them run over you and fight back even more than you normally do.

If you are playing within your bankroll, which you certainly should be, you should not care too much about the bubble. You should be happy to fight back and let the aggressors know you didn’t come to the tournament to fold your cards.

As the newer generations of poker players have discovered, poker is all about balance, and the only poker strategy that can’t be exploited is a perfectly balanced one.

Of course, it is not possible to achieve true balance in poker, but we can at least try to do so and come as close as possible to a balanced poker strategy. 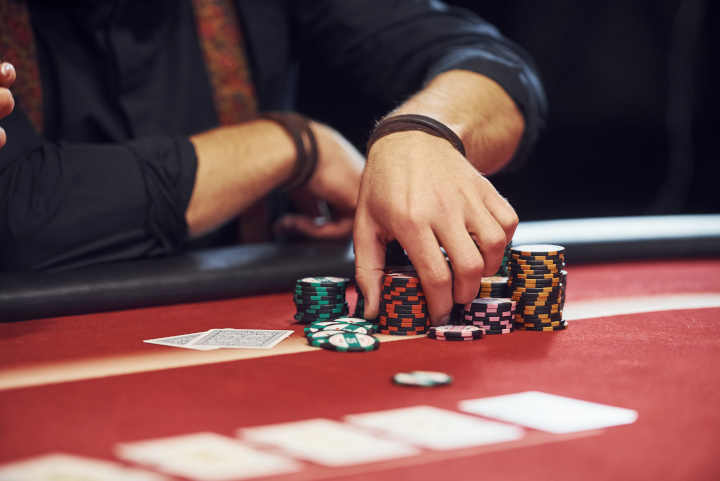 Players who generally adhere to the idea of GTO poker and playing an unexploitable strategy will continue to do so during the bubble stage as well, with little regard to the bubble.

You may also notice that some of the recreational players are not really changing their game either, most likely because they are not fully aware or don’t care about the bubble at all.

Against players like these, you should remain fairly neutral and play the game you normally play, as there are no deviations in the way they are playing either.

Adjusting to the Poker Bubble

I have talked about what the poker bubble is and how it affects play for some people, but how exactly should it affect ours? What basic poker bubble strategy should we adopt?

Normally, playing a balanced strategy is always a good idea. If you are playing in a tough poker tournament with a lot of good players, I would recommend not changing your game much.

Don’t play any tighter or looser against good poker players on the bubble, as there is a very real chance they will realize it and exploit you effectively in turn.

On the other hand, most poker tournaments are not that tough. There will be more than a few fairly bad players at your table during the poker bubble stage.

If this is the case, I would always recommend you go with the strategy of accumulating poker chips and very aggressive play to crush the amateurs and put yourself in a good position to make the final table.

During the bubble, players will not be happy to call down their stacks with hands like draws or one pair, even if they would have done so without much hesitation just a short hour ago.

For this reason, playing your own draws very aggressively and overbetting the pot with made hands is a strategy that will work like a charm against timid recreational players.

Another thing to implement into your poker bubble strategy is playing back against the other good poker players who are abusing the bubble. While they may not like it, they won’t really be able to do anything about it since they won’t have a hand often enough.

If I had to describe the optimal bubble strategy in one word, the word would be aggressive.

Playing very aggressively during the bubble stage will get you results you never dreamed you would be able to achieve.

While playing very aggressively on the bubble may get you eliminated a bit more often, it will also give you the kind of chip stack that will help you make the final table and win the tournament a lot more often.

Because of the payout structures of most tournaments, making the final table and eventually winning the tournament will be infinitely more valuable than just making a min-cash and busting shortly afterward.

How Often Should I Cash?

After all, you will usually be getting between one and two buyins for a min-cash, and this will not have a huge impact on your bankroll. 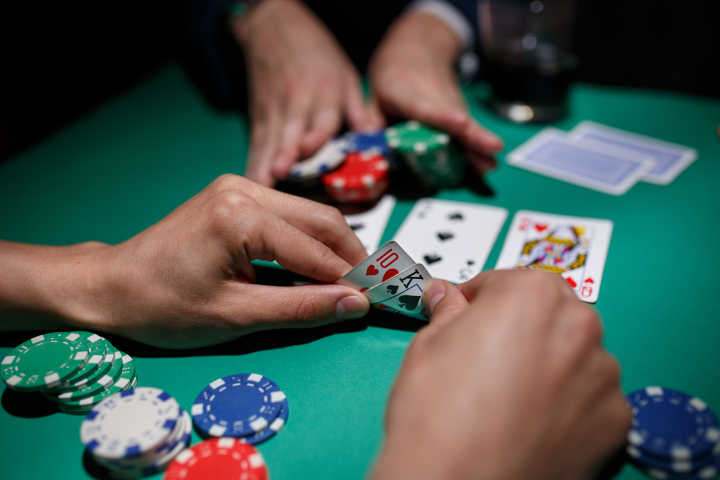 That said, you should not be throwing your money away, either. If you are not getting dealt any cards, it is OK to fold and let the bubble pass without much activity.

Typically speaking, cashing anywhere between 12% and 20% of the time is considered good in multi-table tournaments, but this number is not the one that will ultimately determine your success.

What you should be looking at more than the number of cashes you make is the number of deep runs, final tables, and victories you are booking over a big sample of tournaments.

Winning a tournament is a big feat, but as a good regular, you should be making final tables fairly often.

To make a final table, you will need to have some chips when the bubble bursts or get very lucky in the phase that follows it.

The poker bubble is the best time for chip accumulation, so I would highly recommend trying to go after those dead chips in this stage to prepare yourself for bigger double-ups and a better chance for a final table run.

While the money bubble is often talked about in poker, there is another bubble that comes up in every poker tournament that players actually find even more significant, and this is the final table bubble.

The final table bubble is the phase of the tournament when you are still playing on two tables, and the next elimination will see the remaining players sent to the final table.

While people do enjoy cashing poker tournaments, they enjoy making the final table even more.

For that reason, the final table bubble can be abused even harder.

One downside of the final table bubble is that there are often many good players left by the time you reach it, but many times certain amateurs will find their way there as well.

Watching the TV coverage of many big tournaments in the past, you may have noticed how timid amateurs get when the final table is looming and just how exploitable they get. 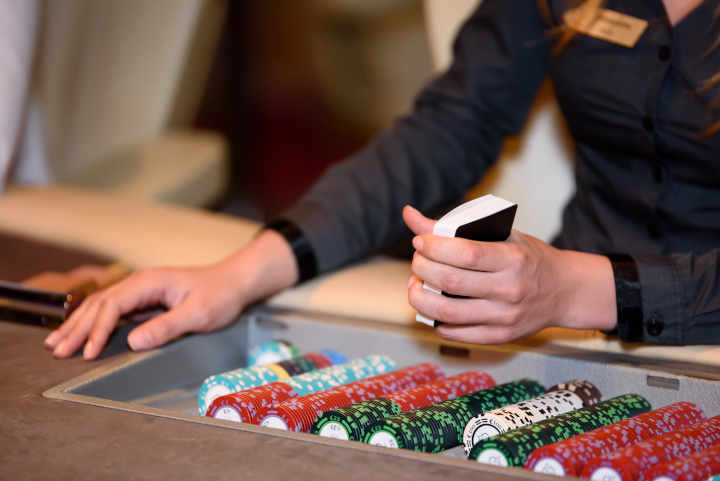 Once you reach the final table bubble, I certainly recommend playing very aggressively and trying to take advantage of any players who are simply looking for that spot at the final table.

At this point, actual ICM implications come into play, which means that if you do have a big stack, you will be able to abuse even professional players.

As money jumps get more significant, players who are aware of ICM will have to tighten up when facing aggression and play their cards more cautiously.

At the end of the day, playing the final table bubble will be all about stack sizes and player tendencies, and you will need to be aware of both in order to make the right plays.

After examining both the money bubble and the final table bubble in poker and the way players tend to play during both, a clear conclusion can be made that aggression wins the day when it comes to bubble strategy.

Players will have a harder time playing back against your aggression during the bubble stages, both because they are looking to make that money jump and because actual ICM implications do exist.

Having a big chip stack in poker tournaments is something you should always use to your advantage to attack other players with.

This is much better than waiting for that stack to become insignificant compared to the blinds.

Push hard during both major bubbles in a poker tournament, and your long-term results will improve dramatically with more deep finishes, more final tables, and more wins!