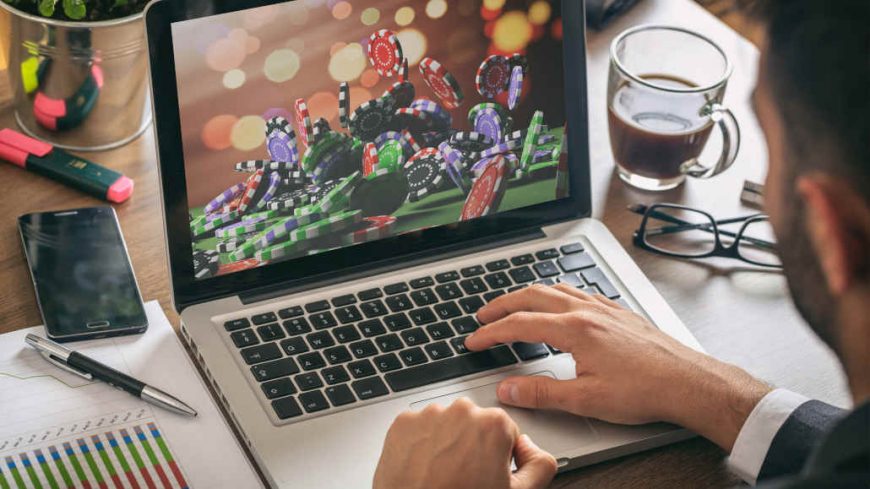 Ever since the advent of the game, the question of whether poker is gambling or skill has been lingering among the players and fans of the game.

While many have adopted Texas Hold’em as a purely intellectual endeavor and have no doubt about it being a skill game, others still consider it purely a form of gambling.

To answer the question is poker gambling, we will need to delve deep into the game’s deepest secrets and compare it to other gambling games.

This kind of comparison can prove essential in determining just how important luck is in poker and why poker is different than gambling games.

As a poker player myself, I can tell you without a doubt that poker is not gambling. The better players always come out on top in the long run, but I want to support my statement with some facts.

So, let’s start out by talking about all the reasons that poker is a game of skill and knowledge compared to gambling games like blackjack or roulette.

Why Poker Is a Skill Game 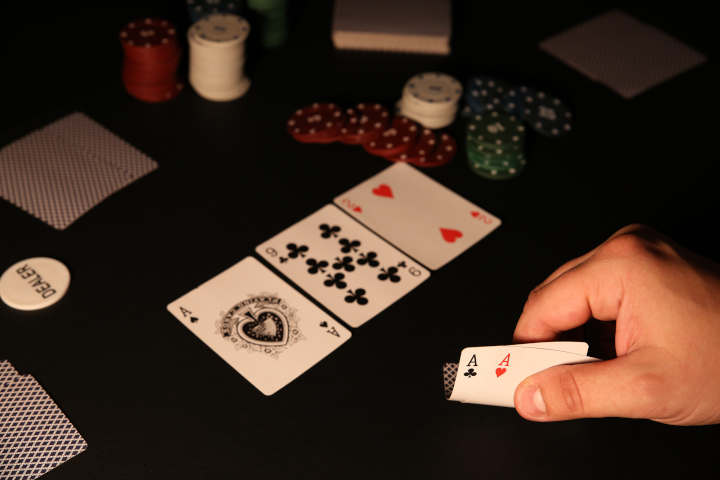 So is poker gambling or skill? The easiest way to answer this question is to compare all the relevant factors of poker with the same factors of a gambling game like blackjack.

There are quite a few differences between the two games, and these differences actually point to poker being a skill game where luck plays a secondary factor.

Here are some of them:

1. You Don’t Play Poker Against the House

A poker is a game played between players, with a player always coming out on top and another player losing. This means the casino is not the winner in the game of poker but rather just the facilitator of the game.

While casinos do charge a fee for facilitating poker games, they don’t play against you. The game is not rigged in their favor, such as all the gambling games you would find in the pit.

Playing poker against the house is also possible in games like Three Card Poker, Russian Poker, and Caribbean Stud, and these games are all fixed against the player from the very start.

Games like Texas Hold’em and Pot-Limit Omaha, on the other hand, are not fixed for any player to win or lose in but rather fair for everyone participating.

Even if there was no actual gameplay involved, you would still be on an equal footing with your opponents, which is already better than any other gambling game.

2. You Don’t Have to Have the Best Hand

Compared to casino games, poker is not gambling because you don’t need to have the best hand to win, nor are you guaranteed to win when you have it.

You can be dealt the winner but get bluffed off your hand at any time, or have nothing but rags but still find a way to beat your opponents to the money.

You determine when you bet, when you call and when you fold. This alone is enough to turn poker from gambling into a true game of skill.

Some may argue that luck plays a big role in this too, and it certainly does play a role. However, experienced players have plenty of ways to navigate that luck and play well regardless of how they are running.

It is true that you can get dealt many great or many very bad poker hands in a single night of poker, but the game is played for the long run results, and they speak for themselves.

3. Poker Has Winners and Losers 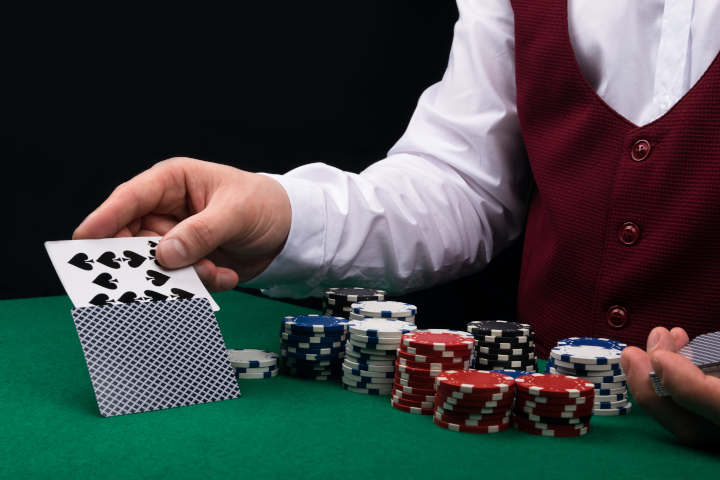 If you examine any poker game over a long period of time, whether it is your home game or the big game at the casino, you will notice that there are big winners and big losers in it.

Oftentimes, the big losers will be players who play poker as a gambling game, simply throwing the chips in and hoping for the best.

Winners are almost always calculated and smart players who take deliberate actions to give themselves an edge over their opponents.

Thousands of winning poker players across the world have proven that poker is not gambling but rather skill by maintaining great results over a long period.

In fact, most people who still ask is poker gambling or skill are the losers who play it like it’s blackjack and hope for their results to get better through pure chance.

Regardless of any speculations or theories, no one in this world makes a living playing blackjack, craps, or roulette.

In fact, these gambling games almost always deplete people’s bank accounts and often lead them into gambling debts they can hardly get out of.

On the other hand, poker is a game that many people use to make a living, playing against others who don’t understand the skill element of the game.

If you can make a living playing poker and sustain your life from it for years on end, then the game clearly cannot be gambling.

A huge list of successful poker players proves just that, as these players have been living well from the game, often for many decades.

5. The Math is Simple

If you are losing money in gambling games, you are losing it because of math, nothing else. The math of these games is rigged against you, giving the house a small edge of a few percentage points over you.

In poker, the same kind of math can be applied. Comparing the playing styles of two players will lead you to the conclusion that one of them a substantial mathematical edge.

It is this edge that makes poker a game of skill and not luck. Players get to determine how they play their hands and when they risk their money.

A losing player will often be happy to risk all his money when it is clear he has a 20% chance to win. A winner will not put their money on the line unless they expect to be a favorite.

In fact, some poker players play the game so bad that they would likely be much better playing gambling games like roulette or craps, while others have been sustaining a profit for many years.

Why Poker is Confused for Gambling

So why is poker considered gambling by some if all the data points to it being a game of skill? Like many other things, it is simply a matter of people not wanting to examine the data before making their conclusions.

There are so many clear indicators that show the skill element of poker and prove that this game is all about who plays better and understands the various elements of the game.

However, some players, especially those who are consistently losing money, would rather attribute their losses to their poor luck than admit they are at fault.

After all, blaming luck is always easier than taking responsibility, not just in poker but in life in general.

A big loser will often mention the one time they’ve got an extremely good run of cards and won big on the night. They’ll also keep talking about the bad beats they received in his biggest losing sessions.

Yet, the same player will rarely discuss the times he threw his money away with trash hands and calling down opponents who clearly had a better hand, as these somehow don’t matter.

The luck element in poker does exist, and it is this element that makes many people confused about what poker really is. 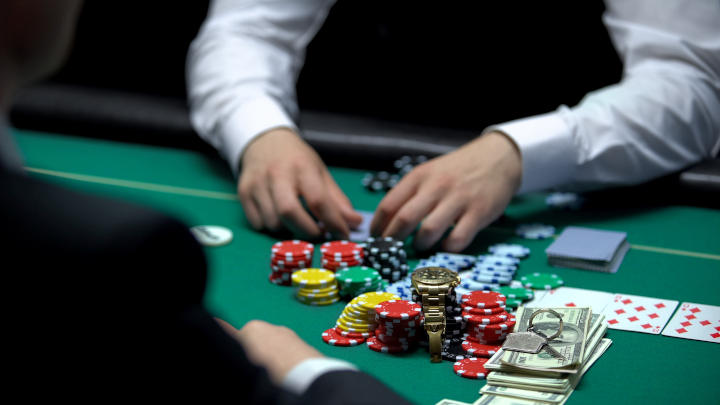 If you were to watch the game from afar, you could not be blamed for thinking it is a gambling game. People are making bets without seeing the cards and then simply turning them over.

Of course, there is so much more to poker than just blindly throwing chips into the pot, and anyone who has studied the game at any level understands this.

Poker is not gambling by any stretch of the imagination. People who still think it is simply need to open their minds and allow themselves to learn more about it.

In the end, winning poker players prefer that a portion of the community think poker is gambling. This allows them to keep winning by playing against players who refuse to improve their poker skills.

If you have been playing poker for a long time and still consider it gambling, I would strongly urge you to reconsider and at least try to learn the game on a different level.

Stop thinking about poker in terms of what cards will come on the flop or turn, and rather consider all the possible scenarios.

Try to figure out what your opponent could be holding, and make the best play against the hands they could have.

The moment you start thinking about poker this way, you will find yourself winning and losing pots for different reasons than you used to in the past.

While you used to win when you had the nuts and lose when you had bottom pairs, you will now start winning with hands you would normally just call with and lose or folding your cards before the flop despite a favorable flop coming for your hand.

Poker is a game of probabilities and odds, and once you are able to learn and apply these probabilities, you will be giving yourself a fair chance to win.

What’s even more, try to find games with players of a similar or lower skill level. Don’t play against professional or serious poker players whose skills far outweigh yours.

I understand your ego might be hurt to admit that someone plays better than you. But your wallet will thank you for avoiding certain players and looking for better spots to play in.

Is poker a game of skill or gambling?

Poker is an intricate game of skill that requires many different elements to win, all of them intellectual.
While you may not understand the game in full just yet, you should trust that all the winning players in the game are doing something better than you and not simply getting lucky all the time.

Why is poker considered gambling by some?

Poker is a game that definitely involves some luck combined with skill. If you put a lot of emphasis on the luck element, the game can seem similar to other gambling games like blackjack or punto banco. Thus, you can easily fall into the trap of thinking poker is just gambling.

How can I be sure that poker is not gambling?

Poker is not gambling, and there are countless ways to prove it. I have cited five different reasons why poker is a skill game, but there are many others as well.
In the long run, there are winners and losers in poker, and this never changes unless the losers actually take the time to learn the game.

Is there luck involved in poker?

Yes! Poker is a card game, and it is a game of probabilities. You can never know what card will come next, but rather only assess the probability of it happening.
Because of this, there is luck involved in poker, and many players believe this luck is the only thing that matters in the game.

How can I get better at poker?

There are many ways to improve your poker skills. You should start out by learning the basic math of the game and knowing the odds and probabilities of different things happening.
From here, you should learn more about bet sizing, bluffing frequencies, poker tells, and other elements of poker, all of which can give you a significant edge over your opponents.