If you have ever been inside a poker room while the action is going, the sound of poker chips clicking together is the one thing you surely couldn’t have missed.

As unusual as it may be, poker players, for the most part, are almost unable to let their chips just sit on the table, and most play with them in one way or another throughout a poker game.

Poker chip tricks are the absolute norm in modern poker. You will see very few players not riffling, shuffling, or rolling their chips while waiting for a new poker hand or thinking about a difficult decision they must make.

If you don’t know how to shuffle poker chips just yet, I will teach you about the most popular poker chip tricks and how you can do them.

However, keep in mind that poker chip tricks take some practice to learn how to perform. Don’t expect to be an expert the first time you take a stack of chips and try to riffle them.

The chip riffle is easily the most popular of poker chip tricks out there and one you will see in any poker room in the world.

While many tricks are done with just a few chips, the chip riffle can be done with a whole stack of chips, and you will need a stack of at least six chips to do it properly.

Also known as the chip shuffle, this trick starts with a stack of chips that you split into two halves. For instance, you could start with eight chips and split the stack into two four-chip stacks.

You then place your palm over the chips, using your thumb and index finger to grab one half and the other three fingers to grab the other half.

As you apply pressure from both sides, the two small chip stacks will gradually work their way into each other, once again forming a whole chip stack.

Learning how to shuffle poker chips this way is one of the easiest ways to play with chips at the table. It should not be too difficult to perfect, especially if you have some dexterity in your fingers.

Some players are a bit less skilled at these kinds of tricks, but most can do it at least reasonably well, as this chip trick doesn’t require any fancy moves.

Some of the most experienced poker players who have been riffling chips for years are able to pull this trick off even with massive stacks of 20 or more chips, and the trick does become progressively more difficult as you add more chips in.

The next poker chip trick that you need to learn if you want to look like you belong among the big boys is the thumb flip.

Of course, poker chip tricks are used just for fun and don’t really affect play too much, but most poker pros and even many casual players know how to perform the thumb flip.

For this trick, you will need a stack of three chips. You are going to place these three chips in between your ring finger, index finger, and middle finger and use your thumb to switch the bottom chip to the top of the small stack.

The thumb flip does not require too much dexterity but will definitely take a little practice before you get it right.

As you start pushing the chip with your thumb, it is important to keep the other chips in place with your fingers and not let the stack move at all.

The trick is in moving only the single-chip you are trying to flip over the other two chips. As you push the chip over the stack, it should roll right over and end up on the other side of the stack. 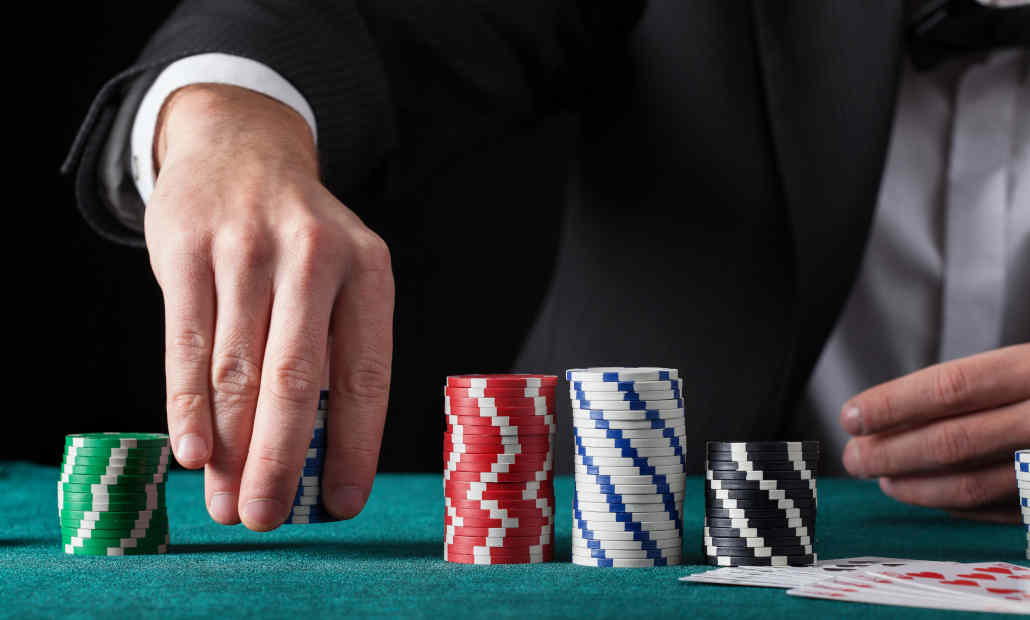 While the thumb flip is relatively simple to perform, it is a trick that looks really cool and impresses many novice players or observers who may see you as a better poker player simply for being able to perform this trick.

Many players use the chip twirl in combination with the thumb flip, switching between the two to create an illusion of performing an extremely difficult magic trick.

Like the thumb flip, the chip twirl is done with three chips, and your hand position should be the same as it was in the previous trick.

You will grasp the three chips between your ring finger, index finger, and middle finger before you start performing this trick.

Your goal will be to push out the middle chip, perform a full twirl of that chip, and then push it right back into the middle of the three-chip stack.

The first part of the trick involves letting the middle chip fall out of the stack by releasing the grasp and simply letting it fall out into your fingers.

You will keep the other two chips in place with your thumb and your index finger while you perform the trick, while you use your middle finger to twirl the third chip between the ring and index finger.

Finally, you will push the middle chip right back into the middle of the other two chips, which are still standing in the place you left them originally.

The chip twirl may sound a bit scarier than the other tricks, and it actually is, but once you master it, you will definitely look very smooth while playing with your chips.

Knowing how to perform all the chip tricks can actually work quite well as an intimidation technique against weak players who may be more inclined to make silly mistakes against you if you know how to shuffle poker chips on an expert level.

The chip roll is another very cool chip trick that you can perform at the poker table to impress other players and keep yourself entertained.

For the chip roll, you are going to need a stack of about five chips, which you will hold in your dominant hand, between your thumb and your index finger.

The trick is to release chips one at a time, letting them slide down your remaining fingers and roll all the way over to your other hand. 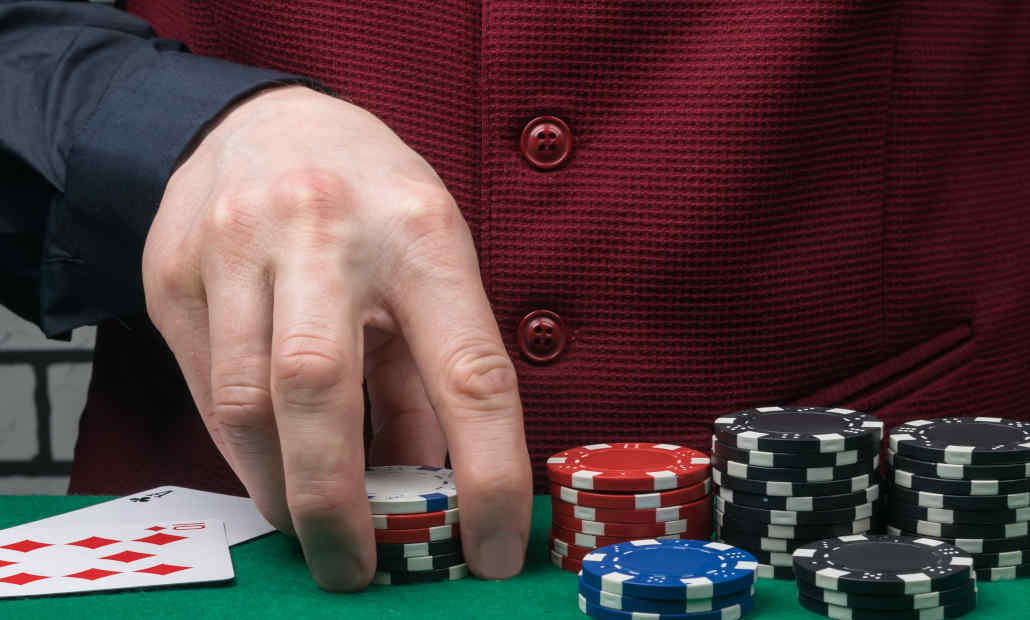 The trick is quite simple in theory, as the chips should easily slide down your fingers and across the table once released.

However, to make the trick just right, you will need to learn how to release only one chip at a time, as well as adjust the angle of your hand in a way that your chips roll over to your other hand but not further than that.

The chip roll is a trick that takes some adjusting and practice depending on the chips you are playing with, even if you are an experienced chips magician, so don’t worry if you don’t get it right immediately.

A slightly less common poker chip trick is the chip bounce, which is done with a small stack of chips on the table and some extra chips on the side.

Your goal is to bounce the extra chips off the felt behind the chip stack and get them to fall perfectly onto the existing stack.

This chip trick doesn’t really work with every type of poker chips, and it requires some adjustment every time it is done.

Depending on the thickness of the felt, the size and weight of the chips, and other things, you will need to bounce the chips from a certain height and at a certain distance away from the stack.

Yet, chips can definitely be bounced up this way, and you will simply need to find the right height and distance to do it from.

The chip should be bounced in a way that the edge of the chip hits the felt and then jumps forward onto the chip stack.

This chip trick will require some trial and error, and once you master it, you may not use it as frequently as some of the others. This is why I would not recommend spending too much time practicing this one if your chips aren’t cooperating.

If you have ever watched the legendary Antonio Esfandiari play poker on TV, you have probably seen him perform the knuckle roll, one of his all-time favorite tricks.

The knuckle roll is a chip trick that requires only one single chip to be performed. You will place that chip between your thumb and your index finger to start the trick.

The first step is to roll the chip over to the top of the index finger, partially over the knuckle.

You will then proceed to move the chip from one knuckle to the next, across the middle finger and ring finger, ending by pushing the chip between your pinky and your ring finger.

To move the chip, you will be using the next finger in line to pull the chip while using the previous finger to push it.

The real trick, however, is to do this so fast and seamlessly that it appears you are doing virtually nothing to move the chips from one knuckle to the next.

On the most basic level, the knuckle roll is very easy to perform, but it looks clumsy and not very smooth at all.

As you get better at it, your knuckle rolls will begin to look cooler, eventually seeming like magic, just the way it seems when “The Magician” performs the move.

Chip Trick #7 – The Spin and Bounce

I left this one for last because it is one of the most difficult poker chip tricks I have ever seen and one that few players can actually perform.

Your starting position for the spin and bounce is the same as for the chip twirl.

You will have four chips in hand, and you will release the top chip, leaving the other three chips between the thumb and the index finger.

Now is where things get tricky. You will use the chip you released to put pressure on the middle of the three chips remaining in your hand, causing it to jump out of the stack and bounce off the table.

You will need to apply pressure on the remaining two chips while allowing the middle chip to be pressured out by the fourth chip.

The chip will jump out, bounce off the table, and bounce back towards you. The final step is to catch the flying chip and put it back into the stack.

This all may sound much easier than it actually is. The truth is that the spin and bounce takes a lot of practice, as well as the right chips and felt to be performed.

Yet, if you really like poker chip tricks and want to take things to the expert level, this is a trick you will definitely want to learn and one that will easily impress even the most hardcore poker players out there.