One of the biggest flaws that amateur players often make in their poker game is trying to put their opponents on an exact hand.

I have heard it more than once that a player will tell another “I put you on ace-king” after making a ridiculous call with the bottom pair for a bunch of big blinds.

Of course, every once in a while, such “reads” will be correct, or they will accidentally get a good result even though the player had a completely different hand.

Poker professionals, instead of thinking in terms of particular poker hands, think in terms of poker ranges, spreads of potential card combinations that a player could have based on the way they have played the hand up to that point.

On this page, I am going to teach you how to think like a pro and construct your own poker hand ranges, as well as think about the poker ranges of your opponents.

The discovery of range in poker has helped many players go from break-even or losing players to big winners in a short period of time. It may just be the most important concept you can learn in poker.

Keep reading to find out what ranges are and how exactly they fit into your poker game.

What is a Poker Range?

As famous poker pro Daniel Negreanu stated in one interview, professional poker players always knew about the concept of ranges, they just didn’t call them that.

Back in the early 2000s, many players played a much more hand-specific strategy, which did not take ranges into account nearly enough. 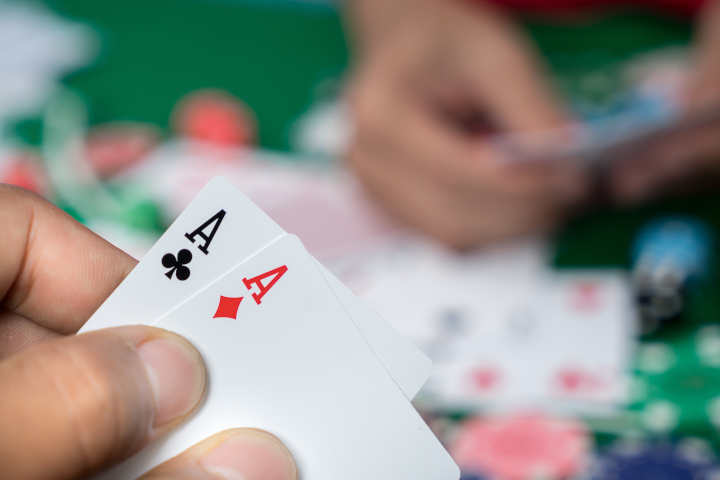 While some of the top pros may have been thinking in terms of ranges, most players would play the two cards they were dealt.

They would try to guess if their opponent was holding AK, AA, or some other hand.

This kind of thinking is largely not applied by poker players these days. Most have realized that thinking in terms of poker ranges is a more constructive way to develop a working poker strategy.

In the simplest terms, a poker range is a group of hands that a player can have at a given time based on their actions up to that point.

Regardless of how a hand is played and who is playing it, it is possible to construct a range of hands they can or cannot have in a given situation.

While constructing ranges can become more difficult when considering the hands of bad players who play way too many hands in all situations, there are still ways to think about these players’ hands in a meaningful way as well.

Let There Be Range

I already mentioned that the concept of hand ranges was not used in the early 2000s. It was not before 2008 when one of the best online poker players ever, Cole South, published his book “Let There Be Range.”

The book was priced at $2,000 at the time, and it was a digital book at that. Many in the poker community saw this as pure madness until they discovered what was in it.

The book shed light on the concept of poker ranges for the first time and introduced players to Cole’s way of thinking about the game, which was revolutionary for most players.

The concept was out of the box and relatively complicated to understand. However, when fully understood, it broke poker down in a way that made a lot more sense.

There is no more guessing in your game if you are playing based on hand ranges. Instead, you are playing for the long run and making educated decisions based on the available information, which ends up working very well.

The first thing you need to do when talking about poker ranges is understand how to construct your own poker range in various situations, and move on from there.

In every situation in poker, you should have a certain poker range that you will play. The hands you want to include in your range will depend on your position, the stack depth, and other factors.

Let us consider one of the simplest examples in poker. You are sitting under the gun in a deep-stacked six-max cash game. Your table is filled with competent players, which means you can’t get too much out of line. 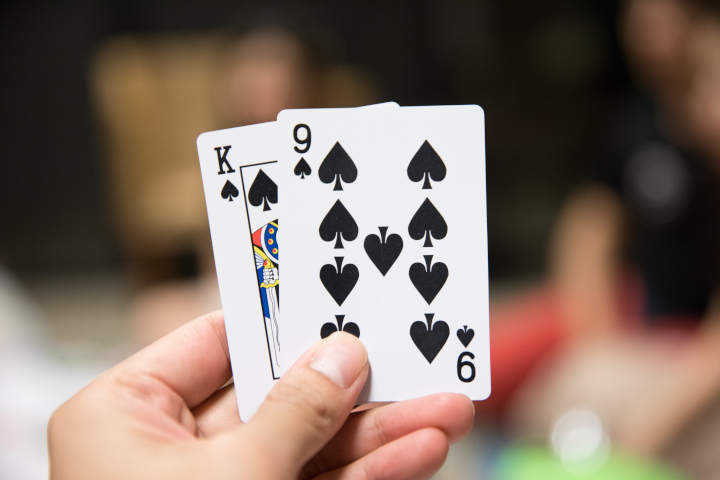 In this situation, you should probably be playing around 12% of all poker hands. These calculations have been done by both humans and the non-human “solver” programs which agree for the most part.

So how would this poker hand range actually look?

The range will include all big pocket pairs, as well as some lower pocket pairs, all the way down to 55. It will also include AKs, AQs, AJs, KQs, AK, and AQ.

Everything less than this should be folded for the most part. Your bad position coupled with the fact five more players are left to act leaves you vulnerable to players exploiting your wide opens.

Of course, you may be used to opening way wider than this, and you may be able to get away with it in some games with weaker opponents.

Yet, whichever way you construct your poker range, it is important that you stick to it and understand why you are opening a certain hand.

The same logic applies to your opening hand range in all other positions, as well as the way your range changes street to street as additional cards are dealt out.

In the UTG opening hands range example I gave earlier, you can see that I only listed a number of very strong value hands in the range.

Once you start playing against competent poker players, you will need to make sure you are balancing your range by always adding some “bluffing hands” into your range as well.

Bluffing hands are those that fall out of the typical range you should be playing in a certain situation and are added into the range for deception.

By adding bluffs into your range, you can remain unpredictable after the flop and still have big hands on a variety of boards where you would not if you were just playing straightforward.

For example, adding hands like T9s, 98s, and A2s – A5s into your UTG opening range can make you very unpredictable, allow you to have 4-bet bluffs before the flop, and generally balance out your range.

Once a hand has started, both you and your opponents will make certain plays. These plays will widely determine the hand range you can have.

You will know how your poker range looks because you were the one who constructed it. However, you will also need to make assumptions about the hand ranges of the other players in the hand.

To determine an opponent’s range, we will take into account several different factors, which include:

The player’s position will generally impact the range of hands they play in a certain situation before the flop. Regardless of who the player is, they are likely to play tighter in earlier positions and looser in late positions.

The next important thing to keep in mind is how they played on each street. A player who just called your raise pre-flop will rarely have pocket aces but will also rarely have 72 off-suit. 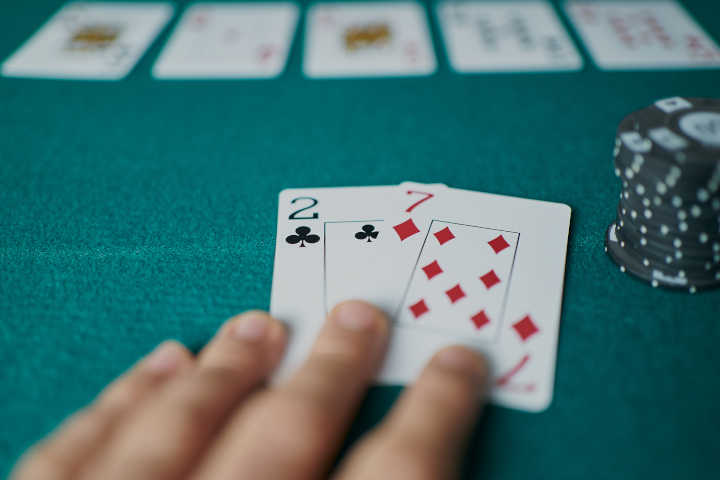 Once you are playing against reasonably good opponents, you will also be able to exclude a whole bunch of other off-suit hands and many suited ones as well based on pre-flop play.

Finally, if you are playing online, the player’s HUD stats can help you construct a player’s potential range, as these will give you an idea of just how tight or loose a player is playing.

The combination of all these factors will allow you to determine a player’s starting range with reasonable precision, and you can go on from there.

How Poker Ranges Change in a Hand

The fact that you put your opponent on a hand range at the start of the hand does not mean you can just assume they still have that same hand range by the time the river card hits.

With every new action, both your perceived range and your opponent’s range will change.

For example, let us think back to the scenario where we opened UTG and one opponent called in position.

The flop now comes A87 with two spades, and we bet 60% of the pot. Our opponent once again calls! This call gives us a lot of information.

For instance, before the flop, our opponent’s range easily included hands like KQs, QJs, or 55. Now, after having called a bet on this flop, these hands are no longer a part of their range.

Hands like 88 and 77 will also not be in there too much anymore. It is likely they would have raised these hands on this board structure that contains many potential straight and flush draws. 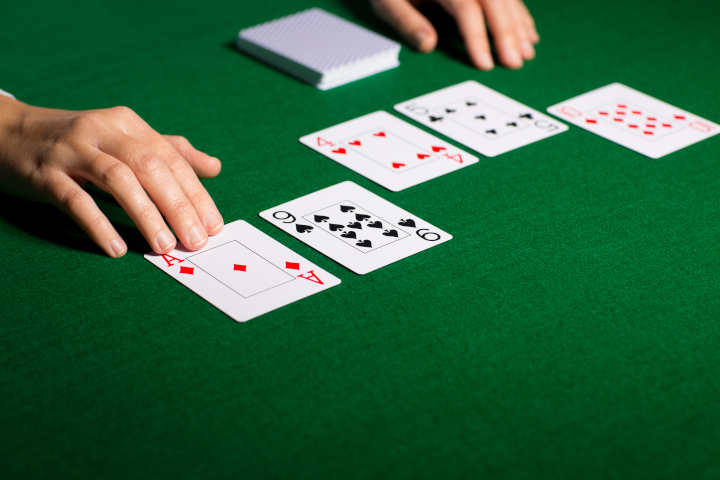 On the other hand, these hands are still possible, along with the likes of A8s, A7s, 87s, and a number of drawing hands like T9s, 65s, and various spade draws.

As the hand continues and new cards roll off, we may get even more information about our opponent’s range, allowing us to further adjust our play.

Of course, it is also important to consider your opponent’s tendencies in constructing their range. Is this an aggressive or a passive player, a loose or a tight one?

These tendencies will allow you to eliminate certain hand groups from your opponent’s range, such as bottom or middle pair hands on the flop and turn, etc.

It is critical to continue adjusting your opponent’s range as the hand goes on and make your big decisions on the turn and river based on the conclusions you made about it from the information you gathered on the earlier streets.

There are two main schools of poker going around these days, and these are the GTO (game theory optimal) and exploitative.

While GTO players try to play a perfect poker strategy that cannot be exploited by others, exploitative players try to use the mistakes of others to their advantage, at risk of being exploited themselves.

Exploitative play is highly recommended at lower levels. A semblance of GTO play is needed to beat the higher levels where players play better poker in general.

If you want to become the master of constructing and dissecting poker ranges, using poker solvers like PIO Solver is a great idea. These will teach you exactly how to think about ranges and how to balance them in various spots.

Another thing to be said about learning the GTO ranges is that you can always adapt them to become more exploitative if needed. This is why learning them is a great asset to your poker game.

That said, learning to play GTO poker is extremely complex, and it will likely take you many months before you come to a point where you are playing close to GTO.

The discovery of the concept of poker ranges has revolutionized the way we play poker and has changed the game of Texas Hold’em forever.

Whatever way you have learned to play poker, learning about poker ranges and starting to think about hands in terms of ranges will improve your game dramatically.

I have given you the basic ideas and concepts to think about. However, the truth is you will need to spend many hours learning about ranges and how to construct them to become good at it.

There is no time to start like now, so get started with some basic poker range charts for pre-flop play and build your way to becoming a master of poker ranges from there!