While Texas Hold’em and Pot-Limit Omaha may be the poker games that are most commonly played these days, this was not always the case.

Five Card Draw used to be one of the most popular poker games, along with Seven Card Stud. The game is not spread too often in card rooms anymore but is still often played in home game settings.

Older poker players all know how to play 5 Card Draw Poker, but the younger generations haven’t really had too much chance to encounter the game.

For anyone who may not be familiar with the game yet, I have prepared a full guide on how to play 5 Card Draw, from the basic blinds and betting structure to some useful strategy tips.

Let’s start out by learning how to play 5 Card Draw and how exactly the game compares to the formats of poker you may be more familiar with.

How to Play 5 Card Draw

The game of Five Card Draw is different from games like Texas Hold’em or PLO in several elements. The first of them is the fact that none of the cards in this poker game are shown face up.

Instead, every player in a hand of 5 Card Draw is dealt exactly five cards, enough to make a full poker hand. You don’t get to see anyone else’s cards, and no one gets to see yours either.

Since no one really has any idea what the other players are holding, 5 Card Draw is sometimes considered to be more of a gambler’s game and less a skill-based one. 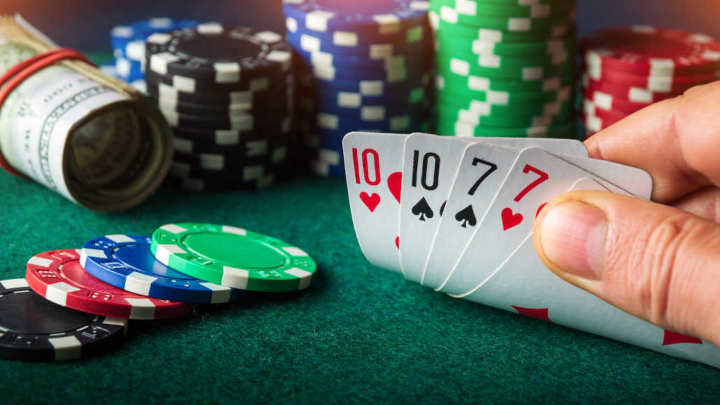 Yet, there is plenty of skill in 5 Card Draw as well and knowing which hands to play, how to use position, when to bluff, and how to play against various opponents all come into play.

To be able to exploit your opponents and actually make a profit when playing Five Card Draw, you will need to know the basic rules first, so let’s cover these.

As previously mentioned, every player in 5 Card Draw is dealt exactly five cards face down at the start of the hand.

Before the cards are even dealt, the two players to the left of the dealer button must place a small blind and a big blind, the value of which is previously agreed on.

The player left to the big blind starts off the action by either calling the value of the big blind, folding his cards or raising the bet.

Five Card Draw can be played as limit, pot-limit, or no-limit game. Depending on the format, players will be able to make either limited or unlimited raises in this betting round.

Most commonly, draw games are played as pot limit or no limit. Once the first player has acted, others can act in turn, each offered the same options as the first player.

Once all the players have acted on their hands, a drawing round ensues. Starting with the small blind, players get to discard as many of their five cards as they wish, getting new cards from the deck in their stead.

Once everyone has received their new cards, the remaining players in the hand now enter another betting round. 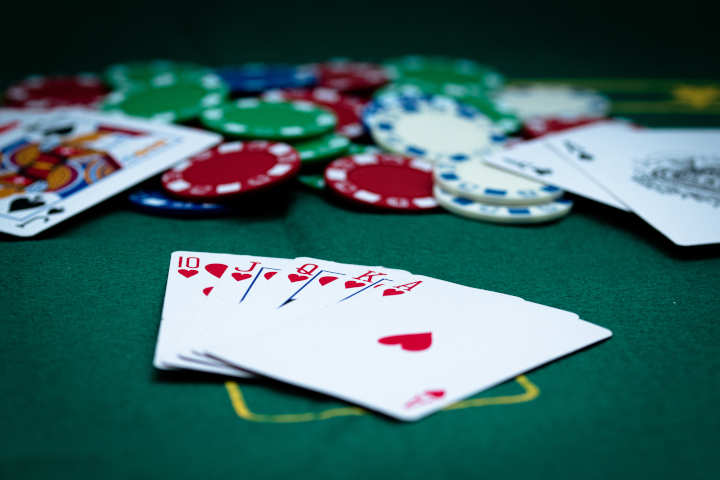 Once again, the action starts with the small blind who gets to bet first, with the action going around the table until all bets have been settled or only one player has remained in the hand.

If more than one player is active at the end, the remaining players show their cards. They are compared in accordance with the traditional poker hand rankings.

In case you are not sure, here is how poker hands stack up in Five Card Draw from best to worst:

Keep in mind that it is possible for players to have the exact same hand in Five Card Draw, such as a flush with the same high card.

In this case, the pot is split. While some home games will compare suits and have one suit beat the other, this is not the case in any official 5 Card Draw games in casinos around the world.

If two players have the same hand, such as two pair, the ranking of the fifth card (the kicker) will come into play, with the higher kicker winning the pot.

Now that you know how to play 5 Card Draw on the most basic level, we need to consider which hands are actually worth playing in this game and when.

Like in all forms of poker, position is very important in Five Card Draw too. If you are sitting on the button, you will get to see how many cards your opponents draw as well as how much they bet.

Being able to control the size of the pot and get a good idea of when you can bluff and when you can let your hand go are all advantages of being in position.

As you would expect, this means you should be playing more hands in 5 Card Poker when you have a good position and fewer hands when you are in early positions. 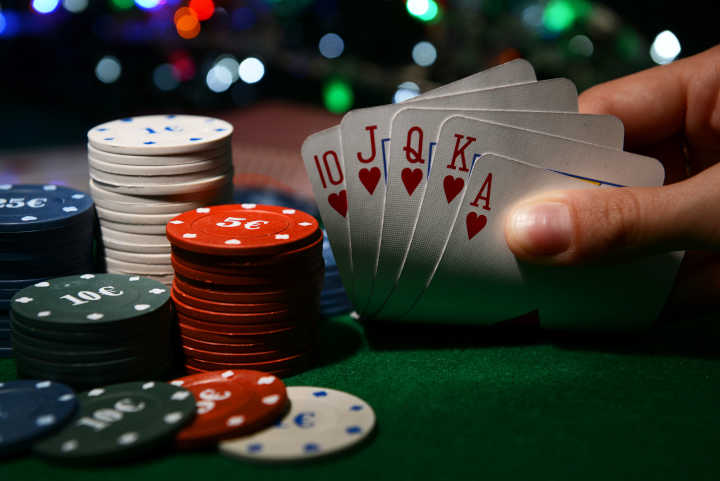 Typically speaking, I would recommend only playing big pocket pairs such as Aces or Kings and better from UTG and UTG+1. You can expand your range as you are closer to the button.

On the button, you can get away with a lot of stuff, although how you actually play will depend a lot on the dynamic of the table you are playing at.

In some 5 Card Draw games, players will play very straightforward. You will be able to bluff a lot on the button. In others, you will need to have more value hands as others will bluff every hand.

On average, you should play:

Many players in 5 Card Draw tend to significantly overplay their drawing hands, such as flush draws and straight draws, simply because they don’t understand the odds.

Drawing two cards to make a flush or a straight is absolute nonsense, as the odds of making such a hand are extremely low.

When you have a draw that only needs one card to complete, you will still be a significant underdog to make it, as you will only be getting one card.

For example, if you hold four cards to a flush, you will have 9 outs out of the remaining 47 cards in the deck. This makes you just over a 4:1 underdog to make your flush.

Drawing hands like a flush draw with high cards or an open-ended straight flush draw can be good to play in position where you can also bluff if you miss and represent having two pair.

However, most draws are not worth playing in early positions, and if you don’t have high cards that can make at least a high pair if you miss your flush or straight, you should consider folding them right away.

Keep in mind that it’s not too hard to get at least one pair in 5 Card Poker. Thus, you are better off waiting to actually have a good hand than blasting off with a draw you are unlikely to complete.

How to Draw in 5 Card Poker?

In Five Card Draw, you will usually want to draw at least one card, as this will allow you to improve on the strength of your hand.

For example, if you have three of a kind, you can draw new cards and try to make quads. If you have a flush draw, you can make your flush with a brand new card.

However, sometimes players are not quite sure about what cards to throw away and what to keep. Also, drawing at very speculative hands such as three cards to a flush seems more appealing than keeping a pair of fours.

Yet, you should always try to make a hand that makes the most sense from a mathematical standpoint, as there are no jackpots to be won for making a straight flush.

What you need to be thinking about is making a hand that’s better than your opponent’s, and this usually won’t take a straight flush to achieve.

In most cases, you should muck your hand if you don’t have a good pocket pair or a very strong draw before the flop, but there are some exceptions.

For instance, you may be seated in the big blind and have the action limped over to you. Similarly, you may only need to complete from the small blind when several players have limped in.

Regardless of how you entered the hand, you should usually:

As you can see, I always recommend only trying to improve to the next best poker hand. If you have trips, don’t leave a high card and discard one. Instead, discard them both and try to make quads.

If you have two pair, go for the full house by all means. When holding one pair, try to make at least trips by discarding all three unpaired cards.

By taking this approach, you will end up with a lot of decently strong made hands such as trips and full houses. You will have a chance to win many pots by calling your opponents’ bluffs or making value bets yourself.

As always, I highly recommend playing in position whenever possible. Try to avoid situations where you have two feeble pairs out of position and have to check-call a big bet before getting to showdown.

We have gone over all the 5 Card Draw rules and basic gameplay, but how about some advanced strategy tips and tricks?

The main thing you should look to focus on is staying balanced. Five Card Draw players tend to either bluff too much or not bluff at all, and neither is good. 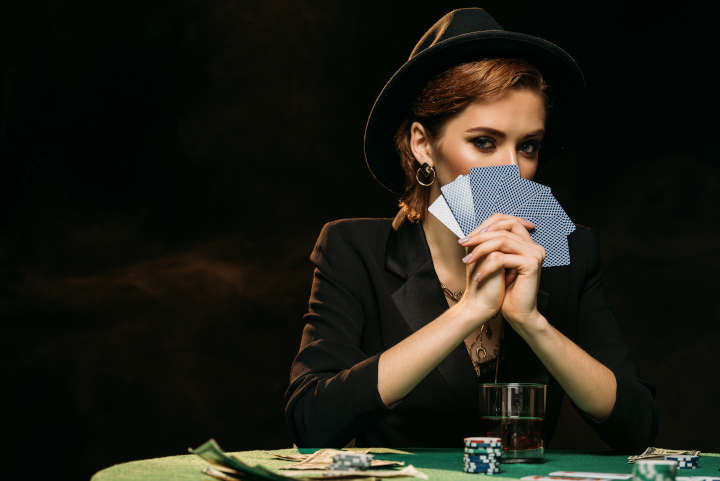 For the most part, you should be playing fairly straightforward and betting your big hands while checking and calling with medium strength ones and folding the weakest ones.

Yet, bluffing is also an integral part of the game. If you never bluff, your opponents won’t really have any reason to call you off when you actually have a big hand.

For that reason, you should implement quite a few bluffs, and you should pick the right times to do it.

A good example of the right time to bluff is when you are holding the button. You see your opponents drawing three cards, indicating they have only one pair. They then check to you during the second betting round.

If you discarded just one card with a drawing hand and bricked out on it, you may try to bluff this hand and win it even if you don’t really have anything.

You can credibly represent having had two pair to begin with or even having made a full house on your draw. They won’t really have any way to know if you had two pair or were drawing to a flush.

Of course, you can expect that some players will look you up on such bluffs and that others will actually check a big made hand to you to call your bluffs.

You should be reciprocating by also calling on their bluffs and trying to remain balanced in all of it so as to remain unpredictable.

Like all forms of poker, Five Card Draw is a skill game with an element of luck. However, the luck element is much bigger in 5 Card Draw than in some other poker variations, and the amount of plays you can make is significantly reduced.

This is exactly one of the reasons why the game has died out in the professional poker world and why most pro players prefer to play the more novel games with community cards.

Yet, 5 Card Poker is a game that can certainly be beaten and is often played by gamblers who don’t understand the odds or the math behind it in the slightest.

For this reason, I highly recommend learning how to play 5 Card Draw, especially if you play live poker a lot. There may be some juicy side games of Draw Poker going on the outskirts of major poker tournaments or events!